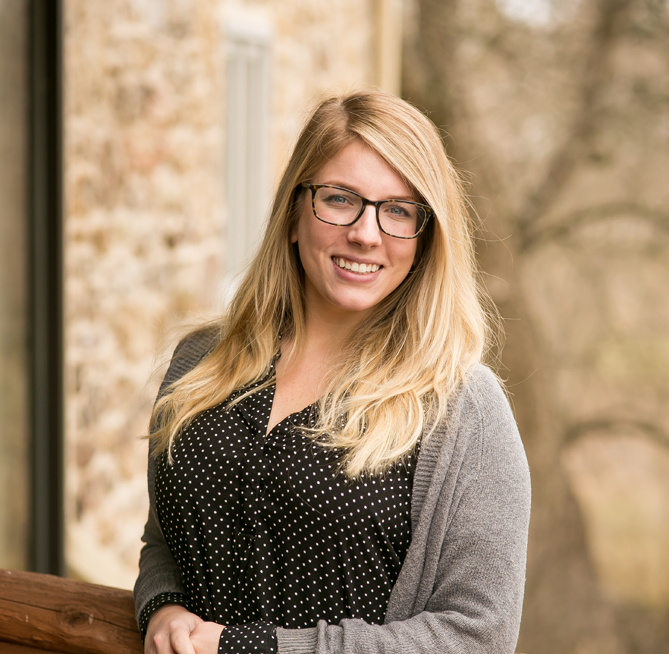 It’s been a long and winding road for New Source Review (NSR) regulation, both since the dawn of [NSR] time and over the course of 2018 alone, where a litany of NSR reform guidance memos were released by U.S. Environmental Protection Agency (U.S. EPA).  So, what do you say we hop in the ALL4 Way-back Machine and review all of the NSR reform movement that’s taken place over the last year. 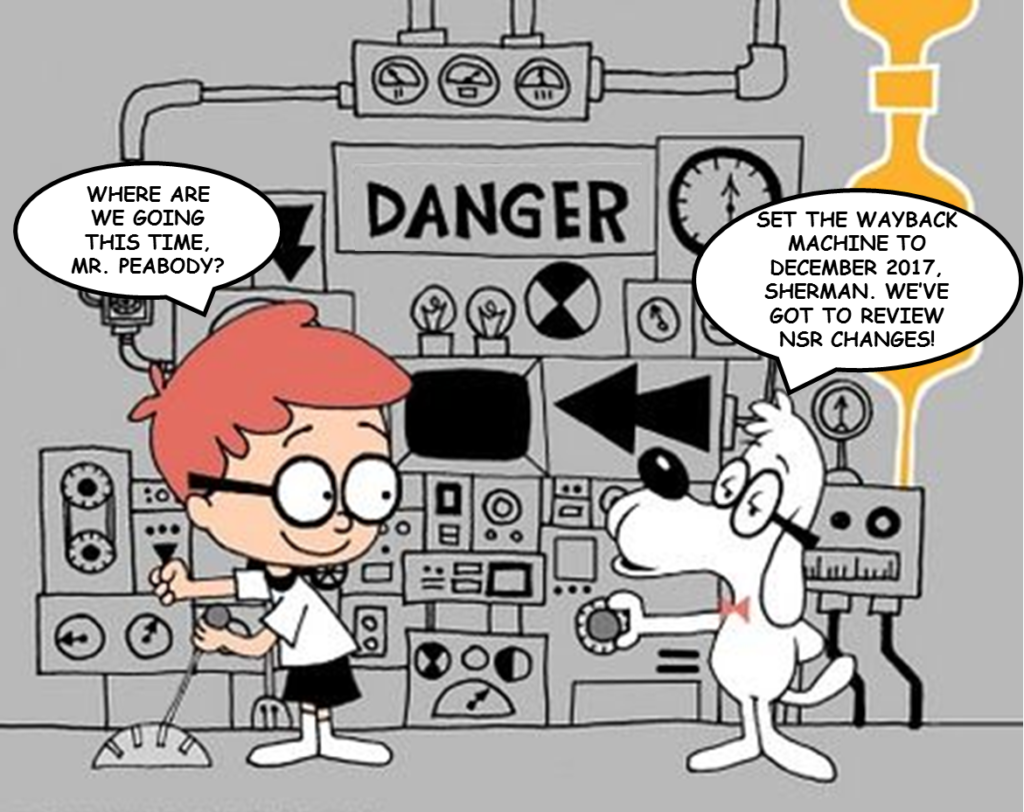 Let’s start our journey back in December 2017.  Former U.S. EPA Administrator Scott Pruitt released an NSR policy memo titled “New Source Review Preconstruction Permitting Requirements: Enforceability and Use of the Actual-to-Projected-Actual Applicability Test in Determining Major Modification Applicability” that addressed U.S. EPA’s interpretation of projected actual emissions (PAE) estimates for projects at major sources.  The purpose of the memo was for U.S. EPA to provide clarity on estimating PAE through “plain readings” of the existing NSR rules.  One of the main things that this memo discussed was whether a facility can factor in the intent to “actively manage future emissions” into a project projection.  U.S. EPA decided that those intentions are considered to be a part of “all relevant information” which is to be included per the as-written NSR rules; therefore, if a facility was planning on managing future emissions from a project specifically to avoid major NSR, then those should represent the projected emissions. However, as Colin McCall discussed following a House of Representatives hearing meeting he attended following the release of this memo, the U.S. EPA policy memo was inaccurately portrayed as providing facilities with a shield from NSR enforcement.  The one thing that was clear following the release of this memo and the House of Representatives hearing is that additional guidance was needed.

We’ve now landed in March 2018 and Administrator Pruitt has just released another NSR policy memo titled “Project Emissions Accounting Under the New Source Review Preconstruction Permitting Program”.  As ALL4’s Nick Leone and John Slade discussed in their respective articles, “New Source Review Project Emissions Accounting Guidance Memorandum” and “Project Emissions Accounting Under New Source Review Permitting”, this memo represented a significant policy change.  The March 2018 memo effectively changed a 2006 U.S. EPA policy of only accounting for emissions increases during “Step 1” of the typical “two-step” NSR applicability evaluation by now allowing facilities to account for emissions decreases that are associated with a given project during Step 1 of the analysis.  Although it may seem like a minor change, it has major real-world impacts.  A common example is the replacement of an old, high-emitting boiler with a new, lower-emitting boiler.  Under the new policy, the emissions decreases from the old boiler being replaced can be subtracted from the potential to emit (PTE) of the new boiler being installed, thereby increasing the likelihood that the calculated Step 1 emissions changes would not exceed NSR significant emissions increase thresholds.  Under the previous policy, only the PTE of new boiler could be considered under Step 1, greatly increasing the likelihood that Step 2 netting would be required and allowing for other unrelated emissions increases to be pulled into the evaluation, possibly changing the NSR outcome when compared to the new policy.

One of the other major changes in this memo was the allowance that emissions decreases that are part of the project and included in the Step 1 evaluation do not need to be federally enforceable (i.e., emissions decreases could now be reflected in the sum of the PAE associated with a modification project and only those emissions decreases that are evaluated under step two netting must be enforceable under the new guidance).  This policy change, if uniformly implemented by state and local permitting authorities, will impact applicability, impact calculations, and ultimately major NSR applicability to many projects involving “affected” emissions units.

There was a lot to unpack in the March 2018 memo and I highly recommend reading Nick and John’s articles for more examples and discussion.  Please also note that this memo serves as guidance and not published rule.  Decisions are still left at the discretion of the permitting body.

Now let’s head over to September 2018.  U.S. EPA Assistant Administrator William Wehrum released a draft NSR policy memo for public comment titled “Interpreting ‘Adjacent’ for New Source Review and Title V Source Determinations in All Industries Other Than Oil and Gas”.  The purpose of this memo was to provide clarity to both industry and agency officials regarding the term “adjacent” and how that affects the scope and extent of a “stationary source” when talking about major NSR and Title V permitting.  Upon the development of the NSR program in 1980, U.S. EPA focused exclusively on facility proximity when determining adjacency.  If two facilities were under common control, belonged to the same SIC Code, and were within a certain proximity, then that would qualify them as adjacent and therefore, qualify them as a single stationary source (i.e., one facility for permitting purposes).  However, more recently, U.S. EPA has not only considered proximity, but also the functional relationship or interrelatedness (e.g., if one facility shut down could the other still operate).  The September 2018 memo clarified that the original intent of the rule, and what U.S. EPA currently believes, was to only consider facility proximity in the adjacency determinations.  Note that proximity is still not explicitly defined and is still based on “common sense notion of a plant”.  Again, this memo serves as guidance and not published rule.

The last stop on our journey is November 2018.  U.S. EPA Acting Administrator Andrew Wheeler released a pre-publication version of a final action titled “Prevention of Significant Deterioration (PSD) and Nonattainment New Source Review (NNSR): Aggregation; Reconsideration”.  The purpose of this final action is to retract a previously proposed revocation of a January 2009 action on PSD and NNSR aggregation.  The January 2009 action was in regard to treating related physical or operational changes as a single “modification” for the purpose of determining NSR applicability.  This action required sources to aggregate emissions from nominally separate activities when they were “substantially related” for the purpose of determining whether they are a single modification resulting in an NSR emissions increase under “Step 1”.  The January 2009 action stated that in order to be substantially related, there needed to be either an apparent connection (either technically or economically) between the physical or operational changes or a complementary relationship, whereby a change at a facility may exist and operate independently, however its benefit is significantly reduced without the other activity.

This action was proposed to be revoked in April 2010; however, this November 2018 final action retracts that.  The idea of project aggregation is extremely important and ties into the March 2018 memo on project emissions accounting.  When thinking about the two-step process for tracking emissions increases and decreases at a source for a project, you have to make sure that the project is accurately defined.  By keeping the action requiring related physical or operational changes as a single modification (i.e., project), this eliminates the potential for a source to essentially break up a large, high-emitting project into multiple small, lower-emitting projects to avoid triggering major NSR requirements.  This project aggregation action ensures that nominally separate projects are treated as a single project where it is “otherwise unreasonable”.  As with most other aspects of NSR, “project” is not clearly defined and again, this is a case-by-case decision.

So that brings us back to present day.  Where do we go from here? What we do know is that U.S. EPA will likely continue to move in the direction of NSR reform and that there are a few more anticipated guidance memos in the works, including one on the definition of ambient air and on Plantwide Applicability Limits (PALs).  In the meantime, stay tuned for Roy Rakiewicz’s 2019 NSR Look Ahead article coming January 2019!