So, who does this apply to?

The number of HMIWIs operating in the U.S. has greatly diminished since the original 1997 rulemaking but for those HMIWIs that operate today, where do the states stand?  Below is a table of U.S. EPA’s Understanding of what the states are up to: 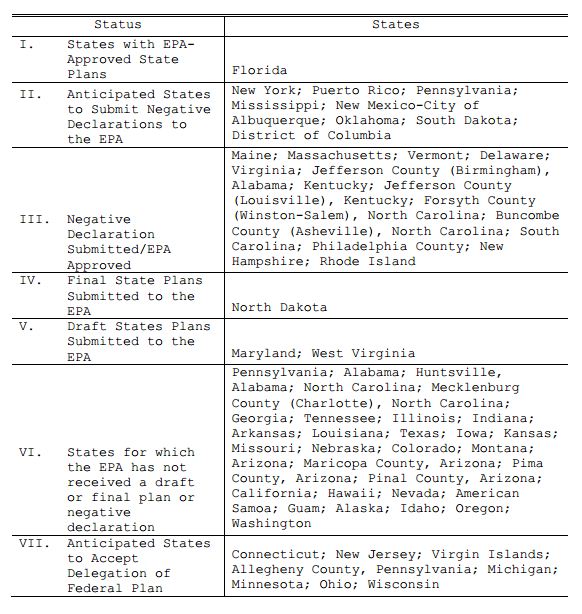 With the majority of states/local jurisdictions somewhere in the process of either developing a state plan or submitting a negative declaration to U.S. EPA, it’s important for environmental professionals responsible for HMIWI air quality compliance to know where each jurisdiction stands.  It’s quite possible that there will be a period of time where an HMIWI may need to operate pursuant to both a state plan and the Federal Plan.  Two examples come to mind.  (1) The state plan may be state approved but not yet approved by U.S. EPA and (2) there may be cases where a state had previously developed a state plan for the original 1997 HMIWI rule but has elected to “punt” this time around making HMIWI sources potentially subject to a historic state plan as well as the Federal Plan.

When do HMIWI have to be in compliance?

What are the major changes in the proposed Federal Plan amendments?

U.S. EPA is also proposing amendments to the New Source Performance Standards (NSPS), 40 CFR Part 60 Subpart Ec. The proposed amendments would eliminate a remaining startup, shutdown, and malfunction (SSM) exemption to emission limits and standards (U.S. EPA overlooked this in their 2009 final rule) to ensure the standards are consistent with the DC Circuit Court’s SSM vacatur.

The proposal has not yet been published in the Federal Register.  Upon publication in the Federal Register (likely sometime in April 2012), written comments will be accepted for 45 days.  Additionally there is an option to request a public meeting.   As discussed earlier, U.S. EPA is already behind schedule, so they do not expect to extend the public participation timeline.

When will U.S. EPA get the Federal Plan promulgated?  It’s anyone’s guess but hopefully before any affected HMIWI sources need to meet the first increment of progress.  (Hint:  we don’t anticipate this date changing drastically, if at all, so if you haven’t started to plan for compliance with the new requirements, namely the more stringent emission limits, now would be a fine time to get started!)