The National Emission Standards for Hazardous Air Pollutants (NESHAP) for Industrial, Commercial, and Institutional Boilers and Process Heaters (which implements Maximum Achievable Control Technology (MACT) standards and is therefore also known as Boiler MACT) was promulgated on March 21, 2011, and amended on January 31, 2013 and November 20, 2015.  Existing units have been in compliance for a few years now and have started to get used to complex monitoring requirements and electronic reporting.

On July 9, 2020, U.S. EPA signed a proposal that responds to multiple court decisions.  U.S. EPA is re-affirming its conclusion that carbon monoxide (CO) is a good surrogate for non-dioxin organic HAP and that a 130 ppm CO concentration threshold represents MACT for organic HAP for six subcategories (Pulverized Coal, Coal Fluidized Bed, Heavy Liquid Fuel, Light Liquid Fuel, Non-Continental Liquid, and Process Gas).  U.S. EPA has also reviewed subcategories with limited datasets (less than seven test runs) and has reviewed emissions data from multi-fuel units previously excluded from its emissions limits calculations and is proposing to revise 34 different emissions limits.  Of these 34 emission limits, 28 of the limits would become more stringent and six of the limits would become less stringent.  There are also a few technical corrections proposed to correct errors and improve clarity, and a discussion in the preamble about a possible change to incorporate procedures into the rule for using carbon dioxide (CO2) instead of oxygen (O2) as a diluent.

What Emissions Limits is U.S. EPA Proposing to Change?

Table 1 of the preamble lists the limits that U.S. EPA is proposing to change based on their re-analysis of the dataset used in the 2013 rulemaking.  For existing boilers, the changes to note are small reductions in the hydrogen chloride (HCl) and mercury limits for solid-fuel units and several changes to biomass-fired unit CO and particulate matter (PM) limits.  For new units, several proposed limits are significantly more stringent than current limits, such as the HCl limit for new solid-fuel units.  The table below, from the preamble of the pre-publication version of the proposed rule, lists the revised limits that U.S. EPA is proposing. 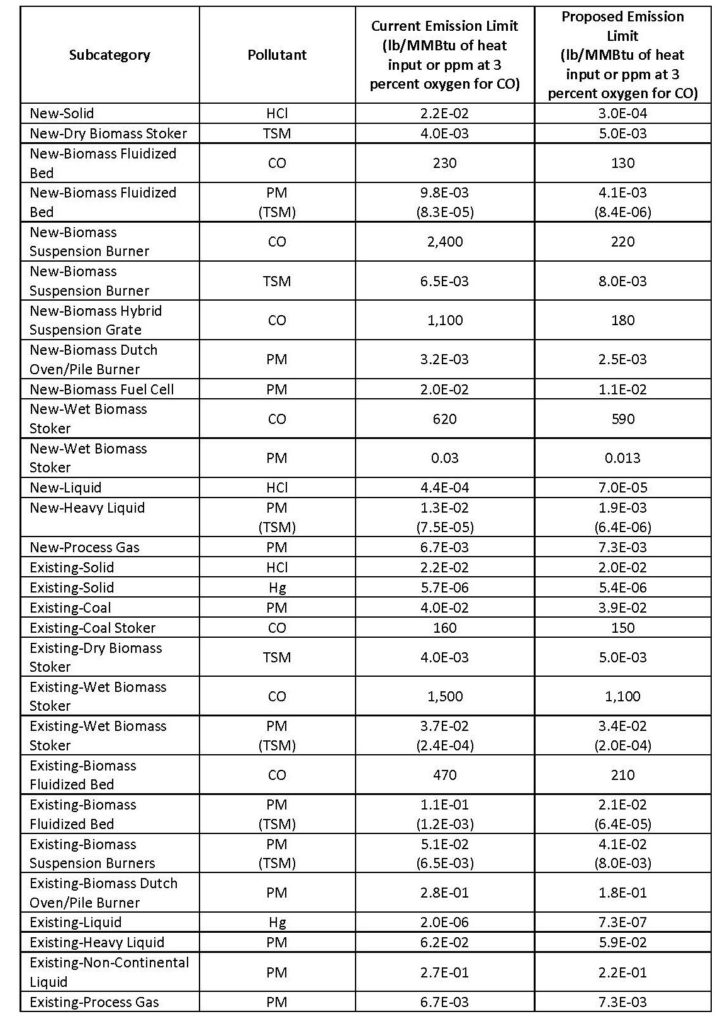 After the proposal is published in the Federal Register, the rulemaking docket will open and there will be a 60-day public comment period.  Stakeholders will review the justification for CO as a surrogate for non-dioxin organic HAPs and the 130 ppm limits and will examine U.S. EPA’s development of the proposed revisions to the various emissions limits.  Facilities subject to the Boiler MACT should review the emissions limits that are proposed to change and determine if compliance strategies may need to be adjusted.  The rule will likely be finalized some time in 2021 and U.S. EPA proposes to give three years for facilities to demonstrate compliance with the revised limits.  Affected facilities should realize that there is a chance that the final limits will look different than the proposed limits, but should plan for the possibility that adjustments in fuel mix or operating limits may be needed to comply.  Although we’ve seen several iterations of a Boiler MACT in the past two decades, even this change is not the last.  U.S. EPA is also obligated to conduct a risk and technology review of the rule, and that review could lead to more stringent requirements as well.  ALL4 staff are keeping on top of the developments and will be assisting industry in reviewing the technical information in the docket once the proposal is published.  Reach out to Amy Marshall for more information.
Contact Us