On February 28, 2014, U.S. EPA requested a remand without vacatur of certain portions of the set of rules commonly referred to as the Boiler Maximum Achievable Control Technology (MACT) rules. U.S. EPA has also requested a similar remand of the Commercial and Industrial Solid Waste Incineration (CISWI) rules.  I know a lot of you are thinking here we go again…history repeating itself.  U.S. EPA has asked for a voluntary timeout so that it can better explain how the emissions limits were established.

U.S. EPA employed a statistical method called the upper prediction limit (UPL) to set the emission limits in the Boiler MACT and CISWI rules. This method has been called into question through a District of Columbia (D.C.) Circuit court decision in National Association of Clean Water Agencies (NACWA) v. EPA. The ruling raised questions over the UPL method to set air toxics limits when only limited data points are available. U.S. EPA wants to take a step back and justify its numerical emission limits. Specifically, U.S. EPA is seeking to remand the standards that were established with nine (9) or fewer data points for the subcategories listed in the tables below. 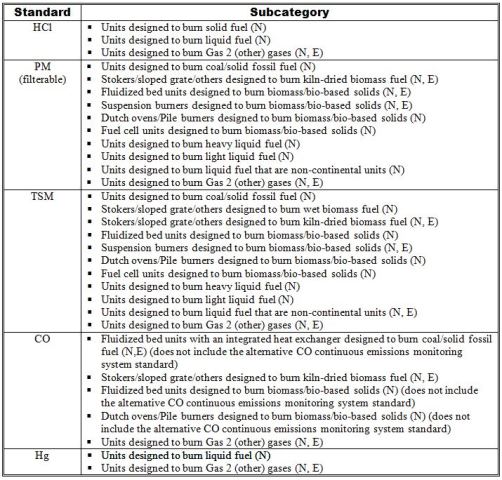 So, what does all this mean? Well, nothing at this particular moment. U.S. EPA has only requested this remand – it hasn’t been granted by the court yet.  What could it mean?  We could see changes to the numerical emission limits for the above subcategories, as well as changes to the compliance dates.  With the current compliance date for existing major source boilers still January 31, 2016, we don’t recommend halting your on-going Major Source Boiler MACT efforts and strategies. The timing is even more unfortunate for existing boilers subject to the Area Source Boiler MACT, since that compliance date is right around the corner. Right now, the prudent approach is to stay your course and plan to conduct your compliance program until a final action changes that schedule.  Stay tuned!!!