As of October 1, 2015, the ozone National Ambient Air Quality Standard (NAAQS) revision has been finalized and set at 70 parts per billion (ppb), which is down only 5 ppb from the previous standard of 75 ppb, and represents the smallest change of the originally proposed range of 65-70 ppb.

Future guidance and actions planned by U.S. EPA regarding this rule include:

There are currently 241 counties measuring ozone above the 70 ppb threshold, as shown in the map below provided by U.S. EPA.   U.S. EPA expects that by 2025, most of the counties outside of California will meet the revised ozone standard.

In other news, U.S. EPA is proposing three (3) separate and independent determinations related to the 36 areas currently classified as ‘‘Marginal’’ for the 2008 ozone NAAQS.  Using complete, quality-assured and certified monitoring data for 2012, 2013, and 2014, U.S. EPA is proposing to determine that 17 areas have successfully attained the 2008 ozone NAAQS, by the deadline of July 20, 2015.

For areas not attaining the 2008 ozone NAAQS, the U.S. EPA is proposing to grant them a one (1)-year extension if the 2014 4th highest daily maximum eight (8)-hour average of ozone is less than or equal to 75 ppb for that area.  This equates to eight (8) total areas, including Philadelphia, PA; Washington D.C.; and Houston, TX; three (3) of the ALL4 office locations.

For areas that failed to attain the 2008 ozone NAAQS, and that do not qualify for the proposed extension, the U.S. EPA is proposing to reclassify these areas as “Moderate” for the 2008 ozone NAAQS.  What does this mean for the States with areas in nonattainment?  These States would be required to submit SIP revisions that meet the statutory and regulatory requirements that apply to 2008 ozone NAAQS nonattainment areas classified as “Moderate.”  U.S. EPA is proposing and taking comment on two (2) options for when the SIP revisions would be due to U.S. EPA for review and approval.  ALL4’s 4th office location, Atlanta, GA, is included in these 11 areas that have failed to meet the attainment deadline.

Check out the table below, which lists areas, 2012-2014 ozone design concentrations, and whether the area is in attainment or not, and it they are eligible for the extension.  Which category does your facility’s location fall into? 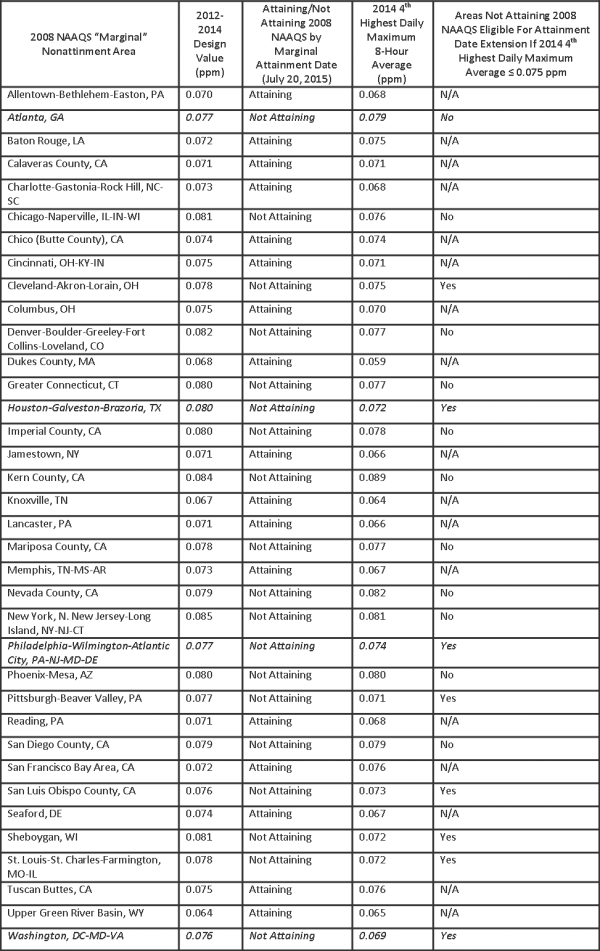