U.S. EPA’s Next Generation Compliance Strategic Plan capitalizes on the efficiencies that can be realized by managing increased amounts of electronic data while also utilizing the 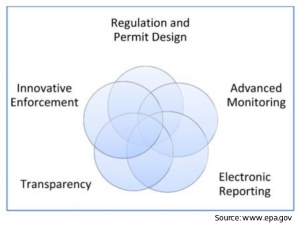 efforts of impassioned members of the public.  Central to the concept of Next Generation Compliance are the five interconnected components of electronic reporting, advanced monitoring, regulation and permit design, innovative enforcement, and transparency.  Very simply, the model relies upon gathering increased amounts of electronic data, giving the public access to that data, and educating the public on how to interpret and collect even more data.  Our President-elect historically remarked that U.S. EPA was an area where he would consider cutting spending.  So, the efficiency and effectiveness of the Next Generation Compliance strategy may appeal to President-elect Trump, and we should anticipate it becoming even more prevalent over the course of his coming term.  Conversely, the push towards transparency may be viewed by the next administration as unnecessary government intrusion into business activity, which could easily result in a policy of de-emphasis on transparency.  Time will tell.

Concerns for environmental justice (EJ) fuel the public in helping U.S. EPA act to execute its Next Generation Compliance strategy.  While the resolution of EJ issues may resonate with many of our own personal values, as environmental professionals we also have questions about how our businesses and industries could be impacted.  I think a natural instinct of many of us is to generally expect increased regulation in order to protect EJ communities.  However, as ALL4 recently shared in our webinar Preparing Your Emissions Today for Enforcement Tomorrow, the impacts may also be felt in the form of innovative enforcement, rather than just increased regulation.

What resources and initiatives are underway at the Federal level?

In its EJ 2020 Action Agenda (EJ Agenda), U.S. EPA cites lead disparities, drinking water, air quality, and hazardous waste sites as the four significant national environmental challenges it will address during the period 2016 through 2020.  Within the EJ Agenda, U.S. EPA highlights community-based works as one of its eight priority areas for reconciling these four challenges.  A number of ancillary groups exist in support of U.S. EPA’s overall EJ Agenda.  Let’s touch on a few examples to highlight their alignment with U.S. EPA’s Next Generation Compliance model.

In its Charter, the Interagency Working Group on Environmental Justice (EJ IWG), which facilitates the active involvement of all Federal agencies to implement President Bill Clinton’s Executive Order 12898, specifically relies upon public participation for achieving the goals.

The Clean Air Act Advisory Committee (CAAAC) Urban Air Toxics Workgroup (Workgroup) is a component of the CAAAC, which was established to advise U.S. EPA on issues relating to the Clean Air Act Amendment of 1990 under the Federal Advisory Committee Act.  Composed of 22 members representing industry, government, tribes, and community action groups, the Workgroup was organized to specifically discuss and identify recommendations relating to urban air toxics, recognizing that there remain areas around the country with elevated risks from potential exposure to air toxics emissions as compared to areas of the country with very few or no sources of air toxics emissions.  In January 2016, many of the final recommendations that the Workgroup provided to U.S. EPA were closely aligned with U.S. EPA’s Next Generation Compliance model components of advanced monitoring and transparency, as follows: 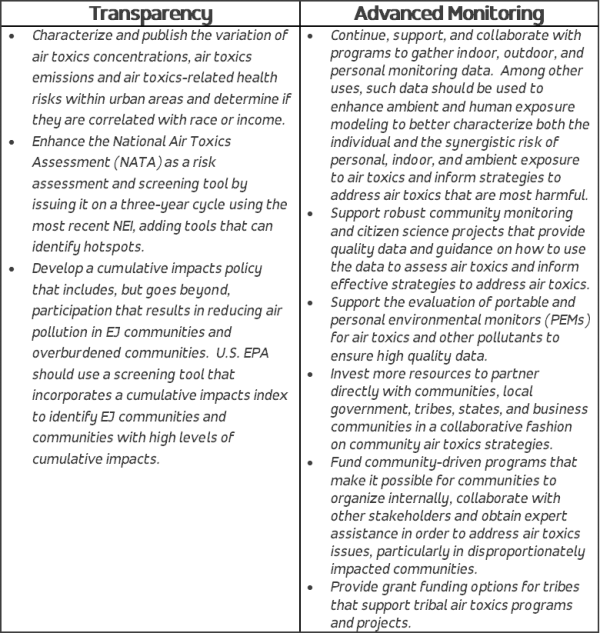 What resources are available to the public?

As discussed above, U.S. EPA and their various supporting factions strongly encourage public involvement on issues of EJ, and not just simply in terms of attendance at public meetings.  The public is being encouraged, at an unprecedented level, to participate in the review and collection of data.  Let’s take a look at some examples of what they have access to.

EJSCREEN, which replaces EJView, was developed to highlight areas in the country that may be candidates for further EJ review,

According to U.S. EPA, EJSCREEN is made available to the public for purposes of transparency but may also be used by the public to “support education programs, grant writing, community awareness efforts, and other

purposes.”  Given that no guidance exists concerning how EJSCREEN or its underlying data could be used “for other purposes,” the implications to facilities feels risky to me, especially when you consider uncertainties like the quality and age of data, and what conclusions the public could draw if EJSCREEN output is reviewed side-by-side with publicly available tools like Envirofacts or WebFIRE which provide data at the facility level.

By simply entering a zip code into Envirofacts, a user instantly has access, for each individual facility in that zip code, to publicly available data relating to topics such as the following:

Envirofacts offers a comprehensive snapshot of what a facility’s compliance obligations might be, while U.S. EPA’s Enforcement and Compliance History Online (ECHO) website allows users to search for facilities within a community and then view things like facility-specific National Emissions Inventory (NEI) data spanning a 10-year period, enforcement case reports, effluent charts, discharge monitoring reports, and the compliance status of each facility with respect to the Clean Air Act, Clean Water Act, RCRA, and Safe Drinking Water Act.

Last, but certainly not least, the public has direct access to performance test reports [including performance evaluations and Relative Accuracy Test Audits (RATAs)], Notification of Compliance Status (NOCS) Reports, and Air Emissions Reports (such as Summary Reports and Excess Emission Reports) submitted through its Compliance and Emissions Data Reporting Interface (CEDRI).  As we’ll discuss shortly, data submitted through CEDRI are at a significant risk for misinterpretation and we highly recommend a thorough understanding of what is submitted, how it is measured, and how it is calculated.

We’ve walked through a few prominent examples of resources that U.S. EPA has provided to the public in order for them to access publicly available facility data.  But, remember, part of U.S. EPA’s Next Generation Compliance strategy is to educate the public on how to independently collect even more data– it’s called citizen science.  U.S. EPA shares that “citizen science covers a suite of innovative tools to engage with the public to apply their curiosity and contribute their talents to science and technology.  Citizen scientists can provide information that would not otherwise be available due to time, geographic, or resource constraints.”

How does the public get involved in citizen science?  One option is grants.  In its Fiscal Year 2017 EJ Small Grants Request for Proposals (RFP), U.S. EPA is offering $30,000 each to approximately 40 one-year projects that relate to one or more of the RFP’s listed Federal environmental statutes (where the Clean Air Act is listed first), and where the conducting of research, investigations, experiments, monitoring, and studies is stressed.

Scientists at U.S. EPA are also collaborating with technology developers on the use of new, low-cost citizen science air monitoring equipment.  Examples of such equipment include passive monitors, personal air monitors, grab-samplers, integrated air sampling devices, direct-read monitors, automated monitoring systems, and air deposition monitors.  U.S. EPA is making these emerging technologies affordable, applicable to near-source fenceline monitoring exercises, and available to anyone with an interest.  They are providing community air monitoring training events and adding more and more content to their online air sensor toolbox for citizen scientists, researchers, and developers so that the public can make informed choices when selecting and using these low-cost technologies, and easily apply for funding for their citizen science projects.

How are facilities being impacted by Next Generation Compliance and Citizen Science?

In support of its goals to increase electronic reporting, U.S. EPA is steadily promulgating and amending its New Source Performance Standards (NSPS) and National Emissions Standards for Hazardous Air Pollutants (NESHAP) regulations to require electronic reporting of test results, monitoring data, compliance reports, and/or emissions reports through its CEDRI, not to mention the reports that are already required to be reported electronically under the likes of the GHG, TRI, and TSCA reporting programs.  However, the electronic reporting being required under the NSPS and NESHAP, as compared to those submitted for GHG, TRI, and TSCA, comes with a level of complexity and investment of time that you have likely not previously encountered or expected.  If you have not done so yet, view a recording of our webinar.  It will give you a sense of things like the intricacies that will be associated with populating U.S. EPA’s Electronic Reporting Tool (ERT) with performance test data before uploading such data to CEDRI, and the criticality of understanding your Continuous Emissions Monitoring System (CEMS), internal calculations, and data management systems.  Then, moving forward, plan to do the following:

We have seen refineries impacted by all components of Next Generation Compliance when consent decrees are used by U.S. EPA as an enforcement opportunity to require things like fenceline ambient monitoring separate from 40 CFR Part 63, Subpart CC; the review by the public of the associated monitoring plan; and the posting of all collected data to a publicly available website.  Another refinery example that involves both advanced monitoring and transparency are the benzene fenceline monitoring requirements of 40 CFR Part 63, Subpart CC, where refineries must upload their collected data to a website for the public to review concentrations and the exact locations of those measured concentrations.

From a citizen science and advanced monitoring standpoint, some facilities are experimenting with citizen science air monitoring equipment so that they can gain an understanding of their own fenceline impacts before their neighbors do.  Citizen scientists and/or environmental groups can easily misinterpret data, submit comment, and slow an active permitting process down.

In summary, U.S. EPA’s Next Generation Compliance model promotes the five interconnected components of electronic reporting, advanced monitoring, regulation and permit design, innovative enforcement, and transparency.  Numerous existing Federal initiatives support the goals of the model and we’re also seeing the public, at an unprecedented level, participate in the review and collection of data.  Due to public databases like EJSCREEN, EnviroFacts, WebFIRE, ECHO, and CEDRI, as well as the availability of new, low-cost citizen science air monitoring equipment, it’s more important than ever to have a thorough understanding of what you submit, how it is measured, and how it is calculated.