The United States Environmental Protection Agency (U.S. EPA) has finalized both the Clean Power Plan for existing power plants and the Standards of Performance for Greenhouse Gas (GHG) Emissions from New, Modified, and Reconstructed Stationary Sources (NSPS): Electric Utility Generating Units on August 3, 2015.  Both were published in the Federal Register on October 23, 2015 and petitioners now have until December 22, 2015 to file appeals with the U.S. Court of Appeals for the District of Columbia.  Half of the states have already filed appeals, so we will ultimately need to see where litigation takes the Clean Power Plan.  In the meantime, here is an overview of the final actions.

The Clean Power Plan, codified in 40 CFR 60 Subpart UUUU and 40 CFR 62 Subpart MMM, establishes source-level emission performance rates for the source subcategories, while retaining state-level rate- and mass-based targets. It also establishes guidelines for states to follow in developing and implementing their plans to meet their targets. More specifically, the Clean Power Plan:

States will have until September 2016 or September 2018 (with an approved extension) to submit their plans for approval. In the interim, States need to decide if they want to submit a plan or otherwise default to the federal plan. Because the Clean Power Plan allows for significant flexibility, States also need to decide how they will achieve their goals — develop individual plans, join in a multiple-state plan, or opt into an interstate cap-and-trade program. States developing individual plans can elect to meet a rate-based goal in pounds per megawatt hour (lb/MWh), a mass-based goal in tons of CO2, or mass-based goals with a new source compliment in tons of CO2. If a state opts for an interstate cap-and-trade program, the states involved must have the same plan basis (mass- or rate- goal). This decision making should have already begun for your state, so now is the time, if you have not already, to understand your state’s Clean Power Plan. Many states have posted their intentions on their websites and many are now taking comments. For instance, Pennsylvania is accepting comments until November 12, 2015 and is actively seeking public input.  See PADEP’s website for more details.

The GHG NSPS (codified in 40 CFR 60, Subpart TTTT) is applicable, with certain exceptions, to any steam generating unit, integrated gasification combined cycle (IGCC), or stationary combustion turbine that commenced construction after January 8, 2014 or commenced reconstruction after June 18, 2014 and who have the following:

Units subject to the GHG NSPS must comply with the CO2 emission standard in either Table 1 (steam generating and IGCC units) or Table 2 (combustion turbines) depending on source type.

Table 1 to Subpart TTTT of Part 60

Table 2 to Subpart TTTT of Part 60 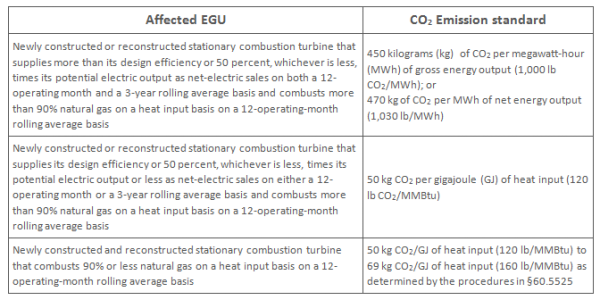 Need help figuring the out Clean Power Plan or assistance determining if your facility is subject to the GHG NSPS?  Please reach out to us at info@all4inc.com with your questions.