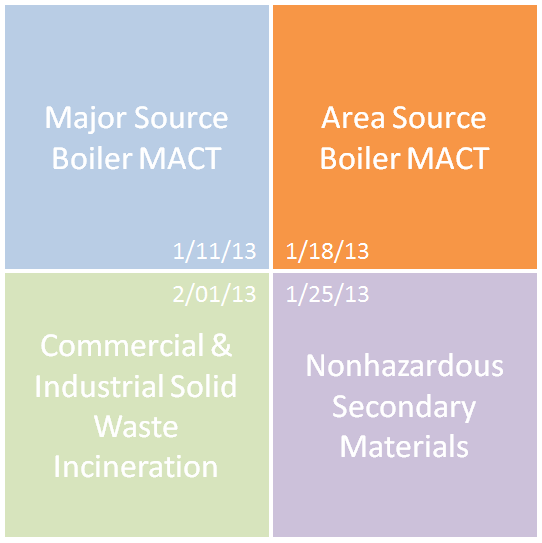 The final rule also identifies additional boilers that are excluded from the source categories above and, therefore, are not subject to the Area Source Boiler MACT.  These additional excluded boilers include electric boilers, residential boilers, and temporary boilers.  U.S. EPA also clarified language around exclusions for boilers with Section 3005 permits and boilers used as control devices.  To qualify as a boiler used as a control device, 50 percent or more of the heat input to the boiler must be provided by the gas stream being controlled, and the purpose of controlling the gas stream must be to comply with a requirement under 40 CFR Parts 60, 61, or 65.

The final rule also contains a number of changes related to work practice and management practice requirements.  For the new subcategories added to the final rule (i.e., seasonal boilers, small oil-fired boilers, boilers with oxygen trim systems, and limited-use boilers), U.S. EPA has established tune-up requirements.  However, the tune-ups are only required every five (5) years as opposed to the biennial tune-up requirements for coal-, biomass-, and oil-fired boilers.  The methodology for conducting tune-ups has also been updated in the final rule to provide more detail around the previously vague tune-up requirements.  This includes allowing for the use of portable CO analyzers to measure the concentration of CO in the effluent stream.  Additionally, the burner and air-to-fuel ratio inspections can be delayed until the first scheduled shutdown, and until the first outage for units that sell electricity so long as the time between inspections does not exceed 36 months.  Tune-ups shall be conducted within 30 days of startup for units that are not operating by the time the inspection is required.  The final rule has also been revised so that initial tune-ups are not required for new or reconstructed boilers.

The initial compliance date of the final rule for existing affected boilers subject to an emissions limitation has not been revised and remains March 21, 2014.  Initial notification for existing affected boilers is now due by January 20, 2014.  The initial tune-up, previously required by March 21, 2012, is now required by March 21, 2014.  The Notification of Compliance Status (NOCS) regarding the initial tune-up requirement, previously due by July 19, 2012, is now due by July 19, 2014.  New sources (which remain defined as those that began operating on or after June 4, 2010) must be in compliance upon startup, except for new sources that began operation on or before May 20, 2011, which must have been in compliance by May 20, 2011.

As mentioned above, all existing boilers subject to Subpart JJJJJJ must demonstrate initial compliance by March 21, 2014.  This means that there is not much time left for those facilities that must install a control device to comply with the Area Source Boiler MACT.  However, in the preamble of the final rule, U.S. EPA states that the Clean Air Act “allows Title V permitting authorities to grant sources, on a case-by-case basis, extensions to compliance time of up to 1 year if such time is needed for the installation of controls.”  So fear not, all hope is not lost if you are still a little late to the party.  However, all facilities must begin to act now because the compliance date will be here before we know it.

The pre-publication version of the final rule can be found here.  Please refer to Susie’s blog post for information related to the final Major Source Boiler MACT.