On October 9, 2020, U.S. EPA finalized amendments to 40 CFR Part 63, Subpart MM (National Emission Standards for Hazardous Air Pollutants for Chemical Recovery Combustion Sources at Kraft, Soda, Sulfite, and Stand-Alone Semichemical Pulp Mills)i.  This action was highly anticipated, as mills were under a deadline to conduct a performance test by October 13, 2020, and some of the amendments pertained to how certain operating parameter limits were to be established during the test (i.e., for fan amperage).  While most mills tested in advance of the amendments being finalized, the final rule provides some certainty going forward.  Some background on the rulemaking and additional details about the final amendments are provided below.

40 CFR Part 63, Subpart MM regulates recovery furnaces, smelt dissolving tanks, lime kilns, and other combustion units at pulp mills.  In particular, the rule establishes emissions limits for hazardous air pollutant (HAP) metals for existing sources [as particulate matter (PM)] and gaseous organic HAP for certain new sources [as methanol or total hydrocarbons (THC) depending on the type of source].  The initial compliance date was March 13, 2004.  Amendments to Subpart MM were proposed on December 30, 2016 as part of U.S. EPA’s 8-year Residual Risk and Technology Review (RTR), and were finalized on October 11, 2017 with a compliance date of October 11, 2019, except that a performance test was due by October 13, 2020.  Other significant changes to the rule included reduced allowances for opacity exceedances, new emissions quantification requirements, provisions for maintaining proper operation of the Automatic Voltage Control (AVC) for electrostatic precipitators (ESPs), removal of exemptions during periods of startup, shutdown, and malfunction (SSM), and electronic reporting requirements.  Additional information about the 2017 amendments can be found here.

The 2017 final rule incorporated an alternative parametric monitoring compliance method for certain smelt dissolving tank scrubbers (i.e., “dynamic scrubbers that operate at ambient pressure” and “low-energy entrainment scrubbers where the fan speed does not vary”).  Instead of pressure drop, which was determined not to be an appropriate indicator of compliance for these types of scrubbers, the rule included fan amperage as an alternative parameter.  Many mills already utilized fan amperage for these scrubbers as a result of site-specific alternative monitoring petitions for compliance with the original rule.

However, as mills began to prepare for the first periodic performance test, it was determined that the method for establishing the numerical fan amperage minimum operating limit was problematic.  The 2017 final rule stated that the minimum fan amperage operating limit was to be set equal to the lowest 1-hour average value achieved during the performance test.  Due to the natural variability of fan amperage for these scrubbers while operating properly, it was determined that these new operating limits would be difficult to meet on a continuous basis, and that lower fan amperage values would not necessarily represent excess emissions.  U.S. EPA agreed with this determination and included three new alternatives to pressure drop for these scrubbers in the 2019 proposed amendments, pertaining to fan amperage, percent full load amperage (PFLA), and revolutions per minute (RPM) of the scrubber fan motor.

However, all three options included a requirement to keep the RPM of the scrubber fan motor within 5% of the design value.  That was determined to be another problematic provision, as the design value may not be available due to the age of the unit, the motor may have been changed since the original installation of the scrubber, and measuring RPM during the test would be difficult, impossible, or dangerous.  It was also noted that it should not matter whether the RPM of the scrubber motor is within 5% of the design value if the performance test demonstrates compliance with the applicable emissions limit.  In the 2020 final rule, the requirement to operate the scrubber fan motor within 5% of its design RPM was removed from all three options.  The definition of no-load fan amperage was also updated.  A comparison of the 2019 proposed provisions relating to these three options and the 2020 final provisions is provided below (red text indicates a change from the 2019 proposal): 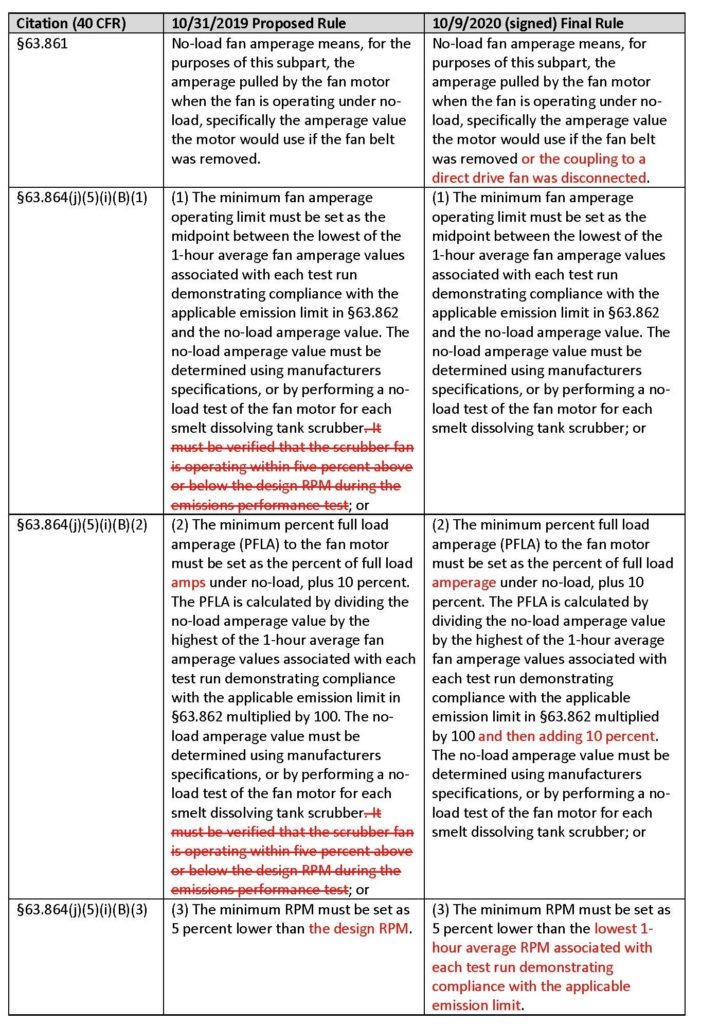 On April 21, 2020, Subpart MM was remanded (without vacatur) back to U.S. EPA due to an unrelated court case concluding that the rule does not regulate all HAPs that are known to be emitted from the sources affected by the rule.  This concept is referred to as “HAP gap,” and Subpart MM is not the only rule that will be impacted by this determination.  So, while there is now clarity for affected sources regarding the 2019 proposed amendments, mills can expect to see more activity for this rule in the coming months and years.  For now, mills should review the final rule, especially if using the fan amperage alternative compliance parameter, and continue with ongoing compliance obligations.

ALL4 will keep you posted on further updates to the rule, but should you have any questions or want to discuss in more detail, please contact your Project Manager or Lindsey Kroos.