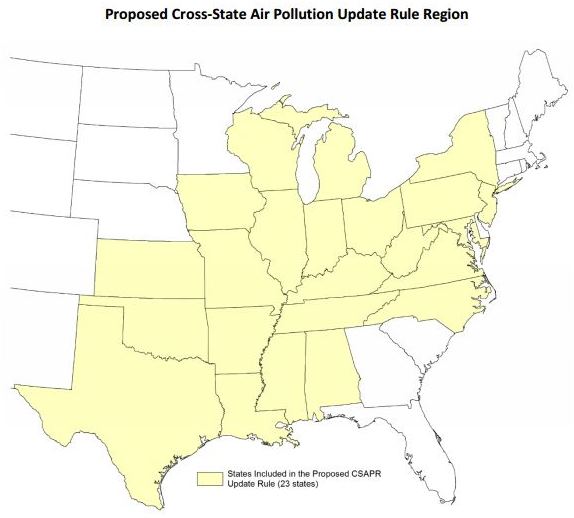 U.S. EPA promulgated the original CSAPR on July 6, 2011 to address the interstate transport of ozone under the 1997 ozone national ambient air quality standards (NAAQS) and particulate matter less than 2.5 microns (PM2.5) under the 1997 and 2006 NAAQS. CSAPR is a “cap and trade” program to reduce nitrogen oxides (NOX) and sulfur dioxide (SO2) emissions from power plants that contribute to interstate ozone and particulate pollution.  CSAPR was designed to replace the 2005 transport rule known as the Clean Air Interstate Rule (CAIR) which was also a NOx and SO2 trading program.  CSAPR then underwent three (3) years of litigation, briefly summarized below.

In a separate litigation (EME Homer City Generation, L.P. v. Environmental Protection Agency), the U.S. Court of Appeals for the D.C. Circuit in their July 28, 2015 decision, held invalid the ozone-season NOX budgets and remanded without vacatur to U.S. EPA for it to reconsider those emissions budgets.

The CSAPR Update is in direct response to the D.C Circuit Court’s July 28, 2015 remand to reconsider the NOX emission budgets; it is also intended to address the lower 2008 NAAQS (75 parts per billion (ppb) versus the 1997 NAAQS of 80 ppb).  As such, the proposed CSAPR Update contains significant reductions in NOX Ozone Trading Budgets for 2017 and thereafter (see summary table here) for many of the 23 states involved.  Please note that the CSAPR Update intends to remove Florida and South Carolina from the program.

States may implement the new standards in their own state implementation plan (SIP) or chose to follow the federal implementation plan (FIP) proposed by U.S. EPA.  Either way, reductions will be needed for many states, so now is your chance to comment.  Once published in the Federal Register, U.S. EPA will accept comments for 45 days.  There will also be a public hearing on the matter on December 17, 2017, in Washington, D.C.