A Little Rule for a Big Issue: the Non Hazardous Secondary Materials Rule 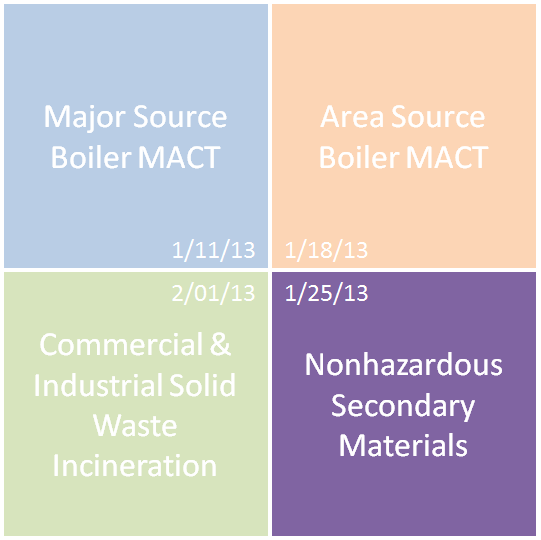 Beginning on page 116 and effectively ending on page 329, the Non Hazardous Secondary Materials (NHSM) portion of the 539 page rendering of the Commercial/Industrial Solid Waste Incinerators (CISWI) preamble and final rule make the pages written per page of actual rule ratio the highest of the 4 Rules (Major Source Boiler Maximum Achievable Control Technology (MACT), Area Source Boiler MACT, and the emission standards for new and existing CISWI units being the other three).  And while the 4 Rules, including the NHSM rule, are printed out double-spaced, digesting a couple hundred pages of comments, responses to comments, and assessing what the revisions mean is not an inconsequential effort.  But that’s why you signed up for ALL4’s blog in the first place, isn’t it?

First, we should refresh our understanding of the intent of the NHSM rule, which is to allow for a determination that a NHSM is not a waste and thus can be used as an alternate fuel or ingredient in a combustion process without triggering the CISWI emission standards.  U.S. EPA has provided three processes by which a material can be evaluated against the NHSM criteria:

U.S. EPA has issued categorical non-waste exemptions for scrap tires, resinated wood, coal refuse, and dewatered pulp and paper sludges that meet certain criteria.  Other materials for which categorical exemptions have been proposed, but not issued, include: manure, paper recycling residuals, construction and demolition wood, and creosote-treated railroad ties.  Preliminary information has been supplied on these four materials seeking a non-waste determination; however, U.S. EPA will require more information before making a non-waste categorical determination.  Remember also, that U.S. EPA has issued multiple “comfort” letters to NHSM users under the self-implementing non-waste option contained in the NHSM non-waste determination process.

It is important to note that even with the categorical exemptions listed above, there are some hidden details in the preamble to the NHSM rule.  For example, if you are a pulp and paper mill and you burn dewatered sludge in a boiler, make certain that you qualify for this non-waste exemption.  Your mill should be burning a significant portion of your sludge (at least 70% by U.S. EPA’s guidance) to make use of the categorical exemption.  A mill can still consider sludge a non-waste if it burns less than 70% of what it generates; however, the mill will need to maintain its own self-implemented non-waste determination on file.  Furthermore, all mills would be wise to track their amounts of sludge produced and burned for documentation purposes no matter which approach is used for assessing non-waste status.

U.S. EPA also took the opportunity to revise a few definitions in the NHSM rule.  The revisions that affect the definitions of “clean cellulosic biomass,” “tire collection program,” and “resinated wood” are somewhat minor and added clarity where clarity was lacking.  The revision to the definition of “contaminants” is a little more important than the other three revisions.  Specifically, U.S. EPA  introduced precursor pollutants in fuels (chlorine, fluorine, nitrogen, sulfur) and eliminated specific Clean Air Act (CAA) section 112(b) and 129(a)(4) pollutants not expected to be found in an NHSM (e.g., hydrogen chloride).  U.S. EPA also grouped total cresols and total xylenes instead of the individual cresol and xylene compounds in the contaminant definition revision.

We offer a final observation about the interrelatedness of the NHSM rule and the Boiler MACT and CISWI rules.  The Boiler MACT rule contains requirements to keep records if you combust NHSM that have been determined to be non-waste.  Therefore, it can be implied that a facility must know on the effective date of Boiler MACT in 2016 if the NHSM it is using is a waste or non-waste, even if the compliance date for CISWI is later than that. (Yikes Dan, are you hinting that I should be worried about something that is more than 3 years out on the regulatory timeline?)

Well, there are always reasons for putting off the effort to address an issue with a long lead time.  However, once you begin to look at the timelines associated with some of the effort around complying with Boiler MACT (e.g., control equipment design, air permitting, and actual construction time),  just planning for Boiler MACT compliance, without considering any NHSM issues, needs to begin sooner rather than later.  Does it make any sense to leave the NHSM determination as the last item to address in early 2016?  If you are looking for certainty around how your fuel profile is going to look in 2016 and what impact it has on your Boiler MACT compliance scenario, finding out at the last minute that your alternate fuel does not qualify as a non-waste, thereby either triggering CISWI requirements or saying good-bye to a valuable fuel, is not conducive to an environmental manager’s peace of mind.  The advice here is to arrange for your non-waste determination sooner rather than later.